The first day on the train was all about getting used to the idea of hours on the train, exploring the sleeper, reading, eating, and hanging out. We departed on time. 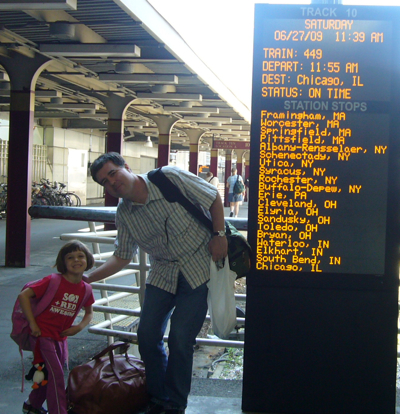 The sleeper was small and a bit dingy. The windows could have been a lot cleaner. I lowered the upper bunk to check it out, and there was a mattress in there for the bottom bunk, as well as a ladder. I closed that up. Later on we opened it up and I set up the ladder and put the mattress for the bottom bunk into a luggage storage section that was over the door. One thing I would say about these sleepers is that if you're elderly and a bit shaky, you probably don't want to use the upper bunk, or you would only want to navigate the ladder when the train is stopped. The bathroom was a combination toilet/shower, which I'll discuss in tomorrow's post. 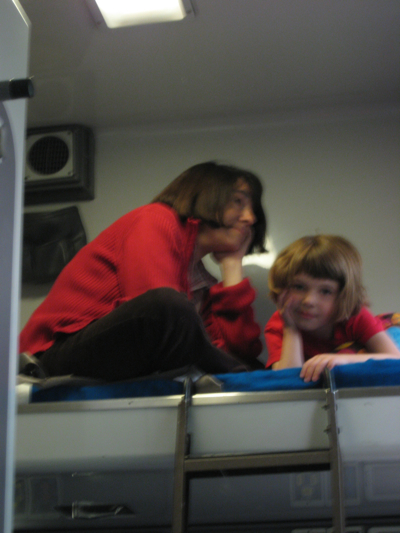 Western Massachusetts was beautiful as always but somewhat monotonous. We followed the Westfield River. 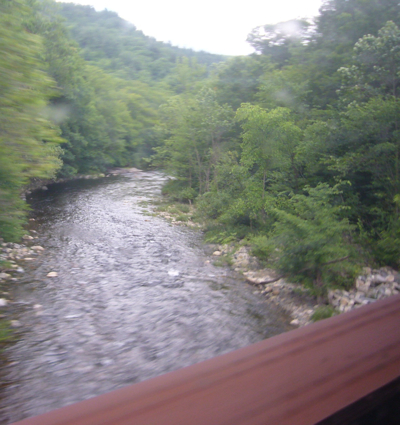 Didn't see any wildlife. Getting a bit bored with the window, we all read: I read: One Second After; Julie read: The Girl with the Dragon Tattoo; and Caroline read Ruby the Red Fairy, a real page-flipper by the looks of it.

The dining car hadn't been attached for lunch, so, as sleeper-car passengers, we got a free lunch from the Cafe car: pesto-chicken sandwiches for Julie and me (flavorless), but accompanied with a pretty good salad with chickpeas, cucumbers, etc.; for Caroline an over-microwaved hotdog. The dessert was pre-fab as well, but tasty: a chocolate mousse.

The stop in Albany was two hours; at this stop, cars were added from a New York train, including a dining car. At the Albany Station (which is actually in Rensselaer) we asked if there was a playground nearby; and, sure enough, there was one just a brief walk away, right on the river separating Rensselaer and Albany. This was underneath the Interstate leading out of Albany, and seemed to be one of those guilty-ish parks built after urban renewal. The families at the park seemed pretty poor, but they loved their park: There were kids playing tennis, throwing the baseball, playing on the jungle gym, etc. I walked down to the Hudson River, and people were fishing. Caroline got some sillies out. 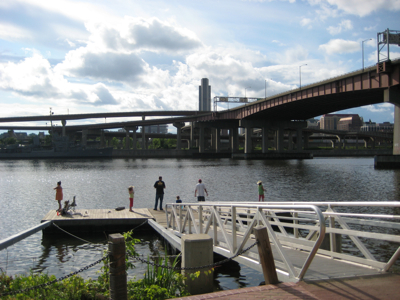 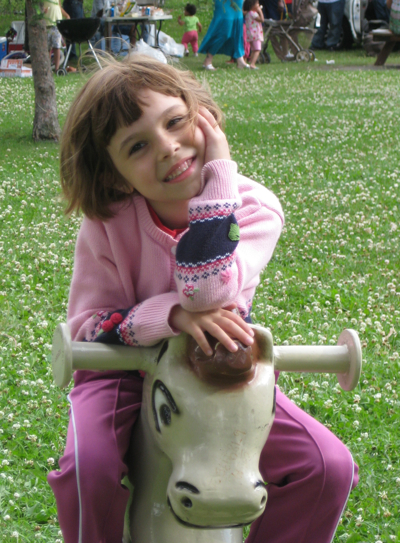 Then we returned to the train, boarded, and shortly afterwards had supper in the Dining Car, which was surprisingly good. Julie and I both had the train's version of beef burgundy, and Caroline had penne with sauce. And we drank two half-bottles of "wine" which was ok.

Caroline really was too shy to socialize with anyone. There were two families with kids of somewhat similar disposition to ours, and we talked with them a bit, but there was little resonance. (Though one dad laughed at my lame joke when he said we were in the boonies and I quibbled that we were actually in the sticks.)

Then back to the sleeper. While we were in the dining car our sleeping car attendant set up the beds for sleep. Caroline konked out fast; 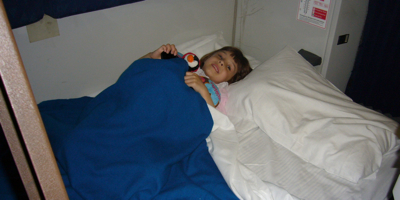 Julie and I kept reading; and before long we were all asleep. I think I woke up some ten times during the night, always due to the strange noises and slowdowns and speedups of the train. Also, the train was blowing its horn at seemingly every crossing, which surprised me. Still, I did get sleep.