Some time around 1979, I was DJ's at the college radio station, and someone pointed out to me a scuffed-up album called "Radio City" by a group I'd never heard of called Big Star. The album had come out in 1974. I listened to it, liked it, played it a bit, and forgot about it. About all I really understood at that point was that they sounded a lot like the Raspberries. Meanwhile, a lot of my friends were getting into this guy who had connections to groups like the dB's. His name was Alex Chilton, and the discovery of the moment was his 1978 "Bangkok" single. About this time, I realized that Chilton had been a co-lead of Big Star, and that he had also sung with the Box Tops, singing the estimable song "The Letter" when he was 16. 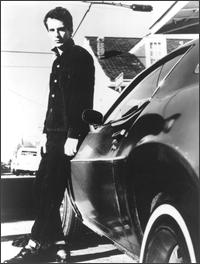 After college I started to rediscover that material, and bought everything I could find, including vinyl copies of Big Star's first two albums, "#1 Record" and "Radio City." When CDs came out, I didn't buy any until the release of both of these albums came out on a double-CD on England's Big Beat label.

It's a great pair of albums. They were recently remastered -- you safely ignore the negative comments on the Amazon page after clicking on the image:

For a good while, Chilton was my favorite songwriter. I listened to those two Big Star albums countless times. I saw Chilton play live in a number of forms, including some really godawful shows in the mid-80s. People complained about his solo material after 1985, but I liked it, and I liked his highly ironic shows.

I read today that Alex Chilton died in a hospital in Memphis of heart problems. What a loss.