Tribal Leadership (Book Review) by jgn on Sunday, June 23, 2013 in Reading and Reviews

Every now and then I hear about a book that is “all the rage” in my circles: When that happens, I have to read it, because I want to be able to detect when people are using ideas from such a source to effect change in the organization. This time the book is Tribal Leadership: Leveraging Natural Groups to Build a Thriving Organization 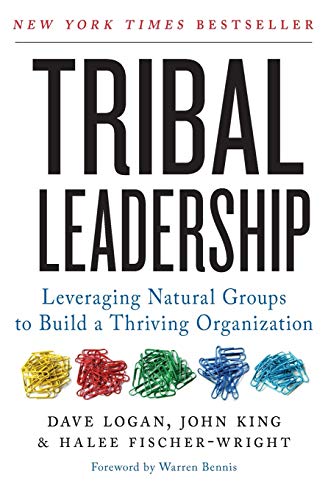 (2008) by Dave Logan, John King, and Halee Fischer-Wright. The book recommendation came into my company via one of our investors.

This is an odd book because it has some extremely acute and resonant stories about types of people who work in identifiable ways, while being rather mixed up in its theory and methodology. Let me talk about the good stuff first.

You will recognize some of these people by type (you may even recognize yourself): They are very successful, and they use “I” language a lot. They see the world egotistically, and they implicitly think: “I’m great, and you’re not” (p. 261). The authors say that this person is in “Stage 3” (more about the stages in a moment). Stage 3 people have some severe problems. Because they think and work egotistically, they tend to prefer “dyadic” (one-on-one) relationships with others. They use these 1:1 relationships to conspire and get their way (frequently covered by the language of teamwork). They can be very successful at this, but the nature of dyadic relationships is that they don’t scale. If your “tribe” (that group of people you work with, where you have a “relationship” with each person and you’re organized by some big effort) has 20 people, then you have to maintain constantly and consistently 19 different relationships. Meanwhile, because these relationships are all separate, you have to remember what you’ve said to each person, because inevitably stories and strategies change depending on the person to whom you’re talking. A set of these dyadic relationships can self-destruct when your peeps start to discover inconsistencies in the various narratives and coercions you’ve littered around your tribe. Tribes with lots of “Stage 3” people may have great individual successes, but they are not really successful as a tribe or team. There are lots of little perverse indicators that someone is locked in this stage: They require direct reports to cc them on everything (p. 97); they obsessively focus on time management (they have to, because of all of those dyadic relationships they’re maintaining) (p. 100); they talk about “values,” but they are essentially their values (p. 101). They are focused on out-performing others, which results in putdowns, often veiled by humor (p. 105).

Been there? I thought so. Me, too.

According to the authors, there is only one way to jack yourself out of this mode of thinking into a truly sharing “we’re great” mode: You have to have an epiphany (chapter 7). This is the most important chapter of the book, but also the most vague and mystical. It seems that the crucial shift to get from Stage 3 (“I’m great”) to Stage 4 (“We’re great”) is to understand that you are most successful in an organization by not competing with individuals internally, but by competing (as a tribe) with other organizations. In both of these stages there is a comparative backdrop, but in stage 4, there’s group ownership; the individual dissolves (p. 113). The epiphany may result in reflections such as: “To win at Stage Three is to win small”; “I now see I have been a manipulator, not a leader”; “I see myself through others’ eyes, and I don’t like what I see” (p. 111).

Typically, a leader emerges who has made this transition to Stage 4, and he or she pulls the rest of the organization up (chapter 8). How do you sustain Stage 4? Through “core values and a noble cause” (chapter 9). There’s some good discussion here about how to evolve your values and mission; a little underplayed is the implicit idea that these values and mission essentially replace your Stage 3 ego. These values can’t be stated once: They require regular maintenance, what they authors call an “oil change” (p. 178), which needs to happen about once a quarter.

Remember how I said Stage 3 people are stuck maintaining dyadic relationships? The authors say that people in Stage 4 no longer do a lot of one-on-ones. What they do instead is share time with two other people -- “triads.” By this means, they share the tribal values, and don’t fall into the trap of have secret dyadic knowledge that must be constantly maintained. The authors provide one example of two people complaining to their leader; the Stage 3 leader would take each aside and tell them how to deal with the other; the Stage 4 leader takes them both out, and says to them: You two work to resolve it (in light of the tribe's values) (pp. 187-189). In some companies, “three [is] the minimum number for a meeting” (p. 197). Personally, I find this emphasis on triads to be a profound insight. If there is anything that has kept me mired in Stage 3, it is probably about 1:1 relationships. Perhaps I’m good at them, but they are a lot of work and potentially poisonous.

The rest of the book is about “tribal strategy” and the rare groups that make it to Stage 5 where there is really no more competition, even with other companies. Instead of a drug company trying to transcend other drug companies in the effectiveness of their drugs, a Stage 5 company drug company would say that they’re fighting cancer. Because Stage 5 is so rare, I won’t belabor it here -- go read the book if you’re interested.

So far I’ve used phrases such as “what the authors call Stage 3” and so forth, and I want to turn to that and say some things about the way this book attempts to make its case. Basically I think the “theoretical” claims here are not supported at all and are simply window-dressing. The book has great merit as a descriptive account of certain personality types in business: I’ve been working in startups for a long time, and Stage 3 and Stage 4 people feel very real to me. I would say that 75% of the people I’ve known are in that weird egotistical “I’m great and you suck” mode, and most of us don’t even know it. Meanwhile, I have experienced something like what is here attributed to Stage 4, where everyone is rowing together. It’s rare, more rare than it should be.

My main concern about this book is that it talks about the Stages as though they’re real. Folks: philosophers, psychologists, and sociologists have been trying to articulate the way people grow and develop since time immemorial. Sometimes people will argue from some core ideas (Plato); other times they’ll do that but provide a facade of supposed empirical research (Freud); then there are statistical approaches that try to provide some confidence in explanatory claims. This book is hopelessly stuck in a mix of questionable theory and awkward empirical data. The authors want to believe that because we talk in certain ways (using “I” language or “we” language) we operate in the world in certain ways: They borrow this idea from Kenneth Burke’s work in the 1960s on “terministic screens.” Perhaps it is true that the strong version of this theory has weight (call it Sapir-Whorf or whatever you want) -- but the jury is out, and there are plenty of authorities who will provide good reasons why the claim is impossible to prove one way or another. So my concern here is: Leave the philosophizing to the philosophers. The authors here have compiled a good number of stories and have some pretty decent generalizations about professional types. That’s great. But is it true for all time? Are humans really rigged this way? Who knows.

Were all of the above true as a theoretical "a priori" framework, it is hard to understand why we would subject observations to statistical analysis -- but the authors do this as well (see Appendix B). So are we going to be empiricists or idealists? I don’t know. But the authors want to be both. I have to assume it’s because readers of business books are very insecure and need to see some numbers that supposedly back up the claims. But Appendix B is a frail substitute for testable hypotheses. Please, give me an experiment to run: Make a "falsifiable" claim. (Read Matthew Smith's The Management Myth for more calls for falsifiable claims in business education.)

My penultimate gripe is that while the stories are good . . . Well, let’s just remember the example of Jim Collins’s Good to Great, where as Steven Levitt and others have pointed out, many of those supposedly great companies didn’t do so great as time passed (the claim of the book was that the greatness was in the company DNA). In other words, these books are terrific at predicting the past, not so great at predicting the future. In Tribal Leadership, much is made of the Stage 4 / Stage 5 behavior of Amgen (the big drug company). As we all know now, Amgen was the master of the kickback and putting marketing ahead of patient health (See https://www.google.com/search?client=safari&rls=en&q=amgen+lawsuits&ie=UTF-8&oe=UTF-8). I’m sorry, but if such a company is really the exemplar of such noble Stage 4/5 behavior, we should think deeply about what it means that in secret they were none such. To be sure, the authors would doubtless say that this was just a pocket of Amgen, but I think history tells us that we should be hyper-vigilant in scrutinizing claims regarding corporations really operating within the scope of their putative values and missions. Indeed, I am not sure that making money and satisfying shareholders is really compatible with Stages 4 and 5.

And my last gripe: This is really a self-help book, and as such, the first thing it has to do is make you feel inadequate. Just like diet books, the first task is to show you how you’re doing it all wrong (even if you’re healthy). The very demarcation of human beings into stages strikes me as profoundly wrong (I don’t like being judged -- or maybe that’s simply because I’m an unevolved Stage 3 selfish egotist). It must be very convenient for a book written by consultants to present a model with 5 stages where the first two are probably not occupied by the intended reader (gratifying); nor is the last, since it is essentially mystical and fanciful -- the consultant always has something to do (i.e., charge for). The book notes that there are many Stage 3 people who merely think they’re stage 4. How clever. This means that you come in already slotted as a Stage 3 egotist manipulator (because even if you suspect you’ve evolved to Stage 4, the book critiques your very self-consciousness) -- or at least have an anxiety that you might be that kind of person. The first tip-off that this was the underlying rhetorical strategy was the unironic citations of Werner Erhard (see http://en.wikipedia.org/wiki/Werner_Erhard).

As I’ve said, there’s a lot of great stuff in the book, primarily in its stories about how people have matured and found common cause around shared values and mission. Still, the book is really just another business book with weak theory, frail “statistical” justification, and a not-so-subtle placement of the reader as someone who needs a very particular kind of help (so as to stop being a stunted human being).